The first global history of Maosim that explores Maos’ life, ideas, influence and legacy as a power that shaped the world well beyond the borders of China. ’A landmark work giving a global panorama of Mao’s ideology filled with historic events and enlivened by striking characters’ Jonathan Fenby, author of The Penguin History of China Since the 1980s, China seems to have abandoned the utopian turmoil of Mao’s revolution in favour of authoritarian capitalism. But Mao and his ideas remain central to the People’s Republic. With disagreements between China and the West on the rise, the need to understand the political legacy of Mao is urgent and growing. A crucial motor of the Cold War: Maoism shaped the course of the Vietnam War and brought to power the Khmer Rouge in Cambodia; it aided anti-colonial resistance movements in Africa; it inspired terrorism in Germany and Italy, and wars and insurgencies in Peru, India and Nepal, some of which are still with us today. Starting with the birth of Mao’s revolution in northwest China in the 1930s and concluding with its violent afterlives in South Asia and resurgence in the People’s Republic today, Julia Lovell re-evaluates Maoism as both a Chinese and an international force, linking its evolution in China with its global legacy. ’Wonderful’ Andrew Marr, New Statesman 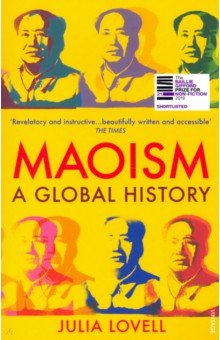